Starting today at Bologna Airport the ninth edition of the IX WALA Annual Conference (2017), the world congress that brings together lawyers, consultants and operators of the Airport sector.

Organized by WALA - Worldwide Airports Lawyers Association, an international Association conceived in Prague on September 2007, where destiny is gathering airport lawyers from across the world, promoting a worldwide forum; a meeting place where aviation lawyers and all other interested parties could develop, share and debate relevant issues in the field of airport law.

In IX edition, hosted by the Bologna Airport, the participants will be more than 80 participants from more than 60 Countries and over 35 In-Council Airports delegates: from Argentina to Malaysia, form Finland to Canada, from Singapore to U.S.A.
Bologna joins Prague, Madrid, Lisbon, Dallas, Amsterdam, Montreal, Buenos Aires and Athens as cities which have hosted a WALA conference and played host to a gathering of airport and air transport legal issues from around the world.
During the conference’s two days in Bologna delegates will explore a range of the most topical issues relating to business regulation and airport activities, with particular attention being paid at next year’s conference to competition, infrastructural development and real estate, bilateral agreements and long haul trips, safety, technological innovation and the "Passenger Experience".

The initiative will be also the occasion for a special meeting of international guests with the Emilian area, being already in the pipeline targeted initiatives in order to promote local territory. Already in program, for example, the visit to Sant’Agata Bolognese Lamborghini Museum. 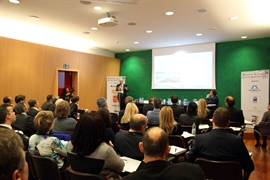