After the central part of the year with a very good trend and over 600 thousand passengers per month between May and October, the month of November reported brilliant results, December saw a real passenger boom (+13.1%, 524,140 passengers), also favored by the instrumental landing system which makes landings and take-offs possible also under low visibility conditions.

The traffic growth in 2015 is mainly due to the starting of several new connections                  (Budapest, Dubai, Katowice, Las Palmas, Lviv, Prague and Tel Aviv) and the increased frequencies on some important existing routes (in particular: Berlin, Bucharest, Cagliari, Chisinau, Copenhagen, Istanbul and Moscow).

Among the favorite destinations, Paris is on the top of the ranking with over half a million passengers  (516,025 including the airports of Charles De Gaulle, Beauvais and Orly), closely followed by London with 515,690 passengers (Heathrow, Gatwick and Stansted airports). Frankfurt ranks third, with 281,947 passengers. The top ten also includes: Istanbul, Barcelona, Palermo, Catania, Madrid, Rome and Amsterdam. 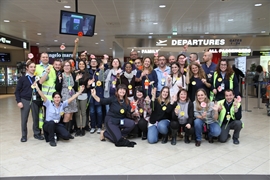