A forest area, or green lung, will be planted north of the airport with the main function of landscaping the airport and capturing the carbon dioxide produced (decarbonisation).
Its planning has already been completed and the tender process is currently underway in order to identify the company responsible for its implementation.
The work is scheduled to be completed by the end of 2023..

This type of intervention involves the capture and subsequent offsetting of CO2 emissions in a totally natural manner: the size of the area, 40 hectares, will play an important role in producing these effects, especially in the long term.

The benefit in terms of carbon dioxide absorption is estimated at 2,300 tonnes/year. To understand the scale of the intervention, on average a single person produces five tonnes of CO2 each year, thus 33 trees are needed to offset the emissions of a single Italian. The type of tree also influences the amount of carbon dioxide captured, as does the age, size, climate and soil in which it is planted. 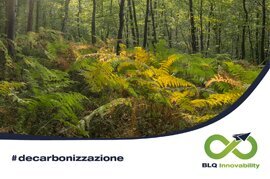