Aeroporto di Bologna is paving the way in Italy for the creation of large ground-mounted photovoltaic systems in airports. In fact, the feasibility assessment of a ground-mounted photovoltaic park north of the runway is underway, which will decisively contribute to the decarbonisation of the entire airport. The study envisages the construction of a photovoltaic plant that could extend over 30 hectares and reach a capacity of 20 MW. AdB wants to self-produce enough energy to meet its current electricity needs.

Currently, the electricity not self-generated on site is 100% from renewable sources, while methane gas is purchased with offset emissions.

In parallel with the commitment to renewable energy, several efficiency measures have been implemented in recent years, such as the trigeneration plant and relamping of the workshop, light towers and terminal. These green projects, together with new initiatives, will allow us to reduce emissions and facilitate the airport's decarbonisation. 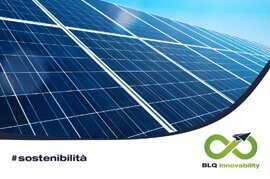