Bologna Marconi Airport has obtained - first airport in Italy and among the first in the World - the Airport Health Accreditation issued by Airport Council International (ACI) World and from ACI Europe.

The program evaluates the health measures and procedures introduced by airports following the COVID-19 pandemic, in accordance with the recommendations of the International Civil Aviation Organization (ICAO - Council Aviation Recovery Task Force), in line with the European Union Aviation Safety Agency  (EASA), the European Center for Disease Prevention and Control (ECDC) Aviation Health Safety Protocol and the ACI Europe guidelines for an Healthy Passenger Experience at airports.

“Since the beginning of the Covid-19 emergency - declared Nazareno Ventola CEO and General Manager of Bologna Airport - Bologna Airport has implemented a series of measures aimed at minimizing the risk of contagion among passengers and airport workers:

the intensive sanitation of the areas also through a molecular fragmentation system, which Marconi implemented for the first time in Italy,

the installation of the latest generation thermal scanners for detecting the body temperature of passengers and staff employed in the offices,

the positioning of disinfectant liquid hand dispensers and plexiglass barriers both in the front office contact points of the passenger terminal and between the workstations of the airport staff,

the patented BEST system for security checks, which allows to reduce the frontal interaction between the staff in charge to Security Controls and passengers,

the provision of ventilation systems in the passenger terminal and all airport premises and offices with high-efficiency filters in the areas with the highest density of people,

signage and continuous communication to passengers on digital and physical media, social media channels, website and corporate intranet communication addressed to the staff.

This is just to mention some of the many actions that the airport has implemented in recent months. We are very satisfied with this important recognition, which certifies our ongoing commitment to the safety of our passengers and the airport community” concluded Ventola.

The Airport Council International World (ACI World) is the sector association that brings together 1,960 airports in 176 countries, represents their interests at international institutions and organizations by developing standards, policies, practices and training to raise the level more and more of quality of airports all over the world.

ACI Europe is the European division of ACI World and groups 501 airports in 45 European. 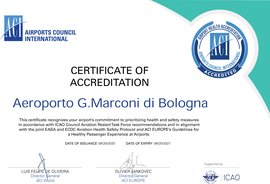 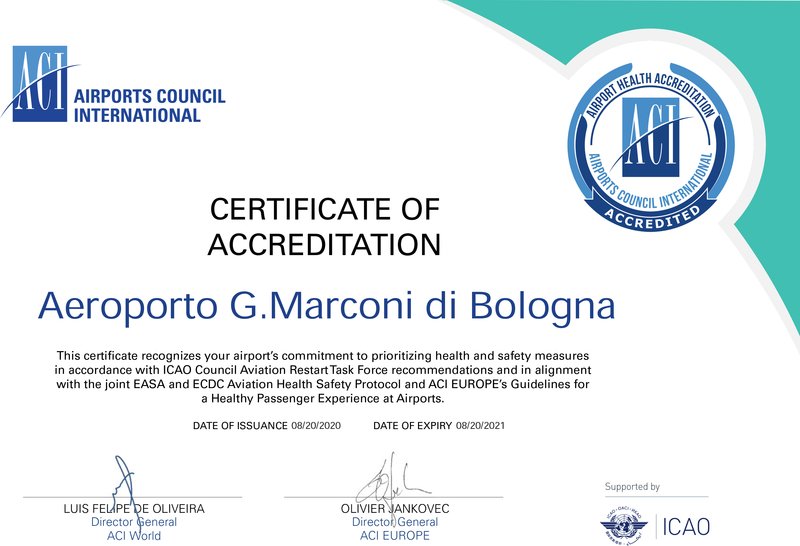 Emirates has resumed services to Bologna, one of its four gateways in Italy, whose operations were inaugurated exactly five years ago on November 3...