The Awards cover 4 traffic categories of airport and aim to recognise overarching achievement in core activities such as customer service, facilities, retail, security, community relations and environmental awareness and operations.

ACI EUROPE counts over 500 airports in 45 European countries among its membership and this year’s competition saw a high level of entries in the competition in each category. This years’ judging panel for the ACI EUROPE Best Airport Awards was drawn from a well-respected group of independent experts from the European Commission, European Union Aviation Safety Agency (EASA), SESAR JU and European Civil Aviation Conference (ECAC).

IN THE ‘UNDER 5 MILLION PASSENGERS’ CATEGORY

The first award, recognising airports in the ‘under 5 million passenger’ category, went to Cork Airport for its support to disabled passengers, its strong community engagement and safety and security indicators, including its recent Drone Awareness Campaign. The judges also highlighted the airport’s recent €4m investment in F&B facilities that promote local products, its recent route network expansion and status of the most punctual airport in Ireland in 2018.

London City Airport was Highly Commended in this category.

IN THE ‘5-10 MILLION PASSENGERS’ CATEGORY

The winner of the ‘5-10 million passenger’ category was Bilbao Airport.

The airport was praised for its remarkable achievements in route development (+21% new routes), PRM services and passenger flow management with excellent satisfaction rates in security and baggage waiting times, in particular. The judges highlighted the airport’s use of technology to improve safety and the variety of its environmental initiatives, such as waste management, noise mapping and investments in LED technology. They also noted its cooperation with local stakeholders, like NGOs and support to local communities, including the organisation of school visits.

Bristol Airport was Highly Commended in this category.

This year’s award in the ‘10-25 million passenger’ category went to Lyon-Saint Exupéry Airport for its new terminal with enhanced intermodal connectivity and its state-of-the art operational control centre and security technology. The airport was also singled out for its focus on a digital passenger experience (e.g. world's first outdoor valet parking robot and airport-to-home baggage service). The judges also considered that the airport’s commitment to sustainable growth and environmental matters, including carbon footprint, noise, waste, air quality and local community relations is exemplary.

The Highly Commended airport in this category was Venice Marco Polo Airport.

In the category for airports with ‘over 25 million passengers’, this year’s ACI EUROPE Best Airport Award went to Rome Fiumicino Airport for the second year in a row. The airport excels in linking its operational excellence to its effective passenger-centric approach. The judges were impressed by the airport’s strong focus on innovation (e.g. SESAR Airport Operations Plan) both in terms of technology and people management. The airport was also recognised for its safety management strategy, close cooperation with the airlines, continuous performance monitoring, clear environmental targets and active local engagement.

Two airports were Highly Commended in this category: Munich and Copenhagen airports.

The Eco-Innovation Award specifically recognises airports’ outstanding environmental performance, in particular, innovative approaches to environmental management. This year, the concept & criteria of this Award have been revised and entries were required to provide details of an innovative project in one of the following three environmental disciplines: Climate Change; Noise Management; and Biodiversity & Wildlife Management. The jury of this Award is mainly composed of members of the independent Advisory Board of the global carbon management programme, Airport Carbon Accreditation.

This year’s Eco-Innovation Award went to Menorca Airport (currently accredited at Level 1 Mapping within Airport Carbon Accreditation) which had applied under the discipline of Climate Change. The airport was commended for investing in considerable resources in reducing its environmental impacts by developing its own dedicated management tools. It was also praised for investing in protection of the island’s rich biodiversity against climate change. The judges also noted that the airport has also implemented good water conservation strategies and addressed a variety of the UN’s Sustainable Development Goals, showing that it is putting in place a well-rounded and inspiring selection of different sustainability activities.

Avinor Oslo Airport was Highly Commended for this Award.

As part of a Memorandum of Understanding signed by ACI EUROPE and the European Disability Forum (EDF) in 2016, the Accessible Airport Award aims to honour the best airport in Europe in terms of its level of accessibility as well as the range and the quality of the assistance services that it offers. It is also intended to encourage other airports to continue their work on removing the barriers that people with disabilities and persons with reduced mobility (PRM) can still face when travelling by air.

This year’s Accessible Airport Award went to Gatwick Airport. It was presented by Christakis Nicolaides, President of the Cyprus Confederation of Organisations of the Disabled on behalf of EDF. The judges were impressed by the airport’s efforts to go the extra mile to provide disability awareness training to all passenger-facing staff, teaching them how to recognise and assist passengers with hidden disabilities.
Additionally, it offers free disability awareness training to all third party stakeholders to ensure consistency of standards.
The airport was also singled out for its close cooperation with organisations of persons with disabilities, including a local community accessibility forum on access requirements of users with diverse visible and invisible disabilities.
The judging panel for the Accessible Airport Award was comprised of EDF Executive Committee Members and Andras Mogyoro, Legal Adviser at the Directorate-General for Mobility and Transport, European Commission.

Bologna Airport was Highly Commended for this Award.

The ACI EUROPE Human Resources Excellence Award was created to recognise individuals and Human Resources departments who have demonstrated excellent leadership and human resources management among ACI EUROPE’s Regular Members. The objective of this annual award - now in its third year - is to give exposure to innovative examples that will help the airport community to better assess and implement the new procedures and skills needed to develop the industry’s workforce. The jury is composed of the Chairs of the ACI regions’ Leadership & HR Fora.

This year’s Human Resources Excellence Award went to Hermes Airports, for demonstrating a holistic cultural change programme in many areas with clear KPIs, as well as best practices that have helped to achieve excellent business results and employee engagement.

Next year’s 30th ACI EUROPE General Assembly, Congress & Exhibition will be hosted by Geneva Airport, on the occasion of the 100th anniversary of the airport, and will take place in Geneva on 16-18 June 2020. 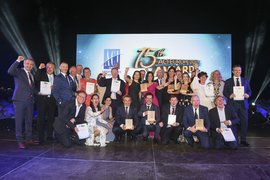