← Go back to Environment & Energy

Our ISO14001 standard compliant Environmental Management System (EMS) helps us to effeciently guarantee an environmental protection. As airport operators, we know that a good relationship with stakeholders and Authorities means talking a common language, based on shared data and information.

Our EMS establishes the measurement of all environmental impacts produced by airport operations (including noise, emissions, water and energy consumption and waste production).

Moreover, within the EMS we adopt specific internal procedures aimed at guaranteeing preventive and corrective actions in case of a potential environmental impact. Our ISO50001 standard compliant Energy Management System (EnMS) represents an operative and organizational tool with which the reduction of energy resources is achieved.

Thanks to an accurate and detailed monitoring of the energy consumption, we can identify all necessary measures to make our infrastructures efficient, and to plan for future efficient infrastructures.

The EnMS is developed with the support by T-ZERO, operated within a funding programme set by the Italian Ministry of the Environment. In addition to the EnMS, Bologna airport has joined the Airport Carbon Accreditation Scheme at Level 2 "Reduction" (Watch video).

Such scheme, promoted by ACI Europe and involving many airport organizations from Europe and the rest of the world, allows us to be aligned and comparable with the highest international standards.

As a large strategic infrastructure, we know that our contribution to the sustainable development of our territory is very important. For that reason, we have undersigned the Sustainable Energy Action Plan promoted by the Municipality of Bologna, in order to provide a support in reaching the common emission reduction goal.

Bologna Airport is one of the functional territorial centres appointed by the PTCP (the local province coordination plan); as such, its future development must be strictly monitored regarding its urban, transportation and environmental aspects in order to keep a proper constant balance between the centre itself and the affected territory.

In particular, in response to the need to mitigate the environmental impacts linked to the airport long-term infrastructural development, and in compliance with the VIA Decree of the Masterplan, on 24 June 2015 the Airport Carbon Reduction Action Plan was signed, pursuant to LR 20/2000.
The Agreement is undersigned by AdB, Emilia Romagna region, Bologna Metropolitan City, Bologna Municipality, Calderara Municipality and Tper, and it outlines a few steps concerning the transport, environment and energy areas- to be undertaken by the signers - aimed at reducing the climate changing emissions caused by the airport and its functioning.

Such steps have been in turn identified as a result of scientific researches conducted within the DAir project, which AdB and Metropolitan City took part in, that also represented a chance to relate directly to other relevant European airport realities (among them, Stockholm, Paris, Barcelona, Vienna).

The steps outlined in the Agreement integrate and cast light on the actions planned by the previous Local Agreement for the Airport Functional Centre signed in 2008, still pursuant to LR 20/2000. 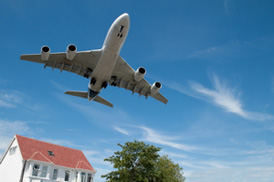 Noise is undoubtedly the most important aircraft-related environmental issue for the surrounding area.

As an Airport Operator, we are firmly committed to constant noise monitoring, and maintaining close contacts with the authorities responsible for regulating civil aviation and air traffic management, in order to implement appropriate measures to reduce airport noise.

Air pollution is one of main environmental issues for a transport infrastructure as an airport. In order to give response about contribution of airport to local pollution, we have an air quality monitoring system that includes two fix station located in the vicinity of airport, aimed at measure concentration of main elements. Environmental data are published on our website every month, available for citizens and Institutions. The airport is served by complex water collection and distribution systems. For years we have pursued a water saving policy through a strict programme of protection and prevention.

We conduct a thorough water quality monitoring campaign, in compliance with waste water discharge regulations and in collaboration with certified chemical laboratories.

The water quality surveys are also managed according to specific procedures set out in the environmental certification, and the results of the chemical analysis are shared with ARPA. Since 2005 we've been participating in the voluntary European Greenlight Programme, promoted by the European Commission.

The programme involves those organizations who have achieved good practises in the field of efficiency of their lighting systems, in order to reduce energy consumption and its relative emissions.