17/06/2016 Bologna Airport has launched today an innovative high-tech information service, “ONE TOUCH BLQ”, the system is based on Beacon, NFC and QR Code technologies that will enhance the Passenger Experience taking it to the next level. Connected passengers will receive the display of contextualized and relevant information on their mobile devices at the right time and the right place, this making the airport easier to navigate and their travel experience more pleasant to live.

“ONE TOUCH BLQ” was developed with the technical support of Connecthings, a French company leader in the industry of communication systems for public spaces, with projects developed in 27 European and American cities. ONE TOUCH BLQ will allow to deliver directly on passengers’ devices the information from the website and the airport’s app that may result most useful in a given area. For example: wayfinding at the entrance with the Airport’s maps, useful hints for security controls in the security control area, a shopping guide, etc.

Links to the information are conveyed through 50 beacons and 85 stickers positioned in different locations of the terminal. Fifteen more stickers will be shortly set on local buses and at the stops of Aerobus BLQ, connecting directly to the Airport’s real time flight information.

The easiest way is to activate the QR Code reader on one’s smartphone and scan the code from the sticker reporting its symbol. This will connect the device to the website page delivering the location-relevant information.

It is also possible to use the smartphone NFC technology, bringing the device within proximity of the sticker’s symbol and access directly to the website content referring to that peculiar area.

However, the most innovative technology uses Beacons. In this case, passengers will not have to take any action, but will simply receive accurate information conveying different messages relevant to the different areas. To receive the messages it is enough to download the Airport’s official app and activate the Bluetooth.

This service is free of charge, available in both Italian and English for iPhone and Android smartphones.

“ONE TOUCH BLQ” will go together with other information instruments that Bologna Airport is already offering to passengers – website, app, social media – and has been presented in Bologna today by Nazareno Ventola, CEO and Managing Director, Clémence Barret, Sales Manager Italy of Connecthings, Silvia Lombardi, IT and Innovation Manager, and Barbara Melotti, Process Control, Quality and Facilitation Manager. 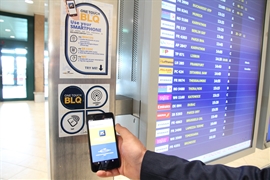 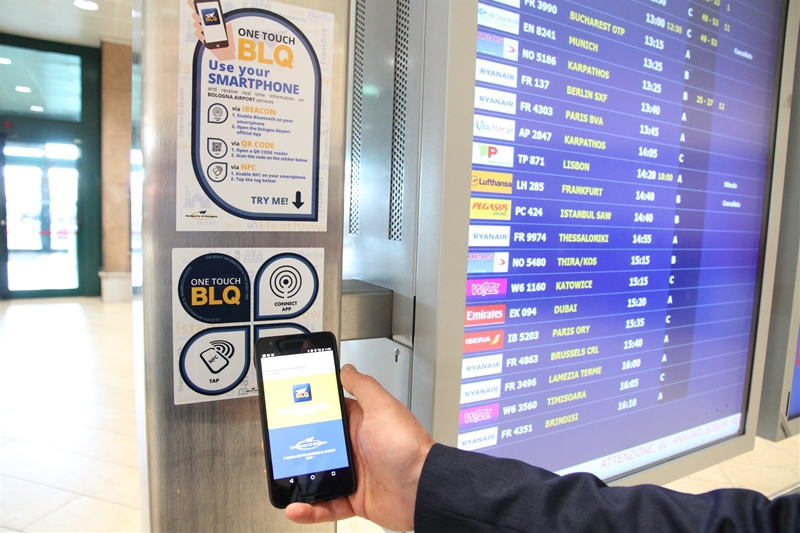