Bologna Marconi Airport is the first airport management company in Italy to obtain gender equality certification based on the new UNI / PdR 125: 2022 regulation.

This important recognition arrived at the end of a long audit process, which measured specific indicators and internal procedures, integrated with interviews with the competent functions and the airport staff, was officially delivered today by Roberta Prati, Industry & Facilities Director of Bureau Veritas Italia, to the Chief Executive Officer and General Manager of Bologna Airport Nazareno Ventola.

"This is - said Ventola - a very significant result, which rewards the work done in recent years by Bologna Marconi Airport in terms of attention to people and social sustainability. In our company has long been in the DNA, as a matter of course, recognize merit and competence regardless of gender. For us, diversity and inclusion are values that are not only good for people but also good for the company and make it more competitive and capable of innovation".

"The certification of gender equality contributes to the change in the culture and organization of work in Italy - said Roberta Prati - In Bureau Veritas we have been engaged for years on the issues of gender equality; I am particularly proud to remind you that - to obtain Accredia accreditation - we have demonstrated that we apply UNI / PdR 125 internally. A sign of consistency and respect for the organizations we are called to evaluate".

The certification, which is valid for three years with annual monitoring, certifies that the Bologna Airport management system complies with the requirements of the standard to ensure a truly inclusive system that respects gender diversity in the workplace, based on measurable data and targets.

In detail, AdB was assessed with respect to six main areas: staff selection and hiring, governance and career management, wage equality, parenting protection and care, work-life balance, abuse and harassment prevention. For each area, quantitative and qualitative indicators (Key Performance Indicators, KPIs) have therefore been identified, with specific scores assigned. The certification is obtained by achieving a minimum score of 60 points out of 100. Bologna Airport obtained the maximum: 100 points out of 100.

In particular, was positively considered: the balance between men and women in management positions (in AdB 44% of the total is represented by women), work life balance initiatives (such as hourly flexibility for non-shift workers, non-emergency smart working, solidarity hour bank, corporate welfare) and the gender pay gap, which sets the pay gap at 0.6% for women against a European average of about 14% for men. It was also important the creation of an Equal Opportunities Committee, with equal representation of men and women, which has the task, also involving the social partners, to monitor and stimulate initiatives to protect gender equality and update the whistleblowing system for reporting harassment. The activity relating to the search and selection of personnel, always managed on an equal basis, the training on specific issues such as cognitive bias and attention to the language used in documents and in communicating passengers was also highly appreciated. 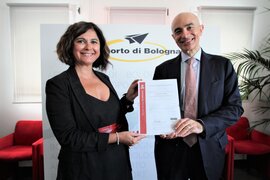