14/12/2022 Bologna Airport obtained "Level 3+ Neutrality" accreditation as part of the international "Airport Carbon Accreditation" programme, the certification promoted by ACI Europe (the European association of airports) aimed at airport management companies who intend to pursue "carbon neutrality" objectives or neutralize CO2 emissions under their direct control through energy efficiency programs and the use of renewable energy sources.

At the "Level 3+ Neutrality" of the accreditation, airports are required to reduce emissions as much as possible and to offset carbon emissions that cannot be reduced by other means. In particular, Marconi has been shown to offset CO2 emissions produced directly by the management company, as well as emissions deriving from staff business travel, using internationally recognized offsets.

The "Airport Carbon Accreditation" project, in which Marconi participated since 2009, first with the recognition of Level 1 - Mapping and up to now with Level 3 - Optimisation, currently includes 220 airports in Europe and a total of 429 in the world.

In the Level 3+ group, which Bologna Airport now belongs to, there are only 49 airports worldwide, mainly in Europe, including: Athens, Brussels, Budapest, Copenhagen, Dublin and London Gatwick.

The Marconi was admitted with the following motivation: "in recognition of the airport’s exemplary work in reducing its CO2 emissions, engaging other stakeholders to do the same and compensating responsibly the residual CO2 emissions under its control, as part of the Global airport industry’s response to the challenge of Climate change”.

“This important acknowledgment - commented the CEO of AdB Nazareno Ventola - is an important step, albeit not conclusive, of our decarbonisation process and confirms that we are working in the right direction in terms of sustainability and respect for the environment. But we don't want to stop there, so we will continue to work with the aim of becoming carbon neutral as soon as possible".

In 2021, Bologna Airport purchased electricity from 100% renewable sources and 100% offset the emissions produced by the combustion of natural gas and the fuels consumed, through financial support for international gas reduction or absorption projects greenhouse effect.

For the next few years, Marconi is working on the design and construction of important environmental compensation works including a wooded area north of the track, the installation of new photovoltaic systems and further energy efficiency of the existing lighting and air conditioning systems. 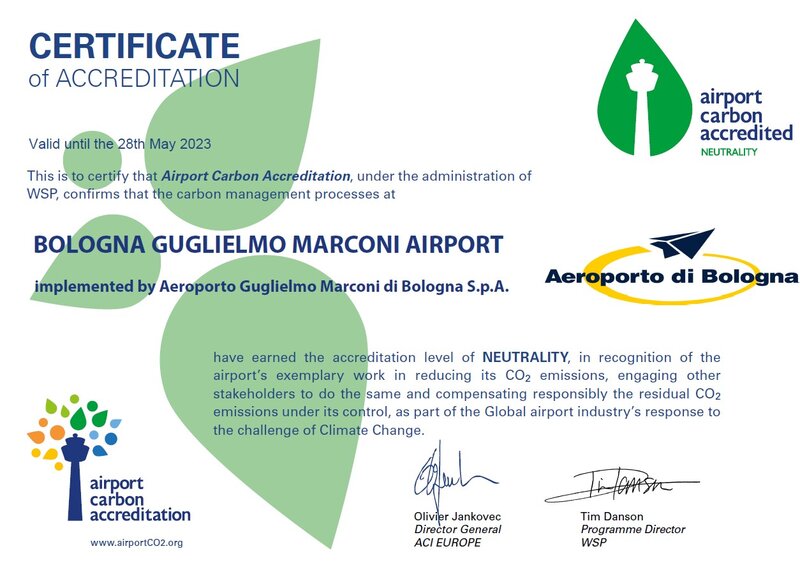