On the 27th of August ,160 experts from all over Europe will attend the international Aviation-Event conference to discuss strategies and best practices for the recovery of the sector. This Bologna event is the first edition of the symposium to be held in Italy.

Bologna becomes for one day the European capital of the aviation industry and hosts Aviation-Event 2021 BLQ, the international conference that since 2008 brings influential representatives of the world of aviation, tourism and industry companies together. A totally dedicated edition to Aviation Business and to the recovery of the sector that has chosen the capital of Emilia to land in Italy for the first time ever. Bologna Airport, in collaboration with Bologna Welcome, is hosting the initiative which will be held in the historic setting of Palazzo Re Enzo on August 27.

More than 30 speakers of national and international level, 160 participants and a large number of specialized media, these are the numbers of an event that aims to give impetus and new life to a sector severely hit by the pandemic, indicating a common path to follow for a sustainable recovery, forging an industry capable of adapting to extreme and sudden events.

"It is not by chance that this initiative is held here in Bologna - underlines Enrico Postacchini, President of Bologna Airport -. It has been a long work started a year ago to bring for the first time the symposium here in Italy, and we have succeeded thanks to an excellent identity card, an international airport that offers high-level services to a catchment area of more than 47 thousand companies with a strong propensity to export and internationalization of “the made in Italy". Companies often market leaders in the field of engines, biomedical, automatic machines and food. All served by Bologna Airport. But also, a tourist destination that in recent years has seen a very strong development".

"Aviation Event represents an important opportunity to reflect on and meet the different realities that make up the complex mosaic of the travel, hospitality and transport industry - says Giovanni Trombetti, Bologna Welcome President -. A moment that, in view of the restart, takes on even more significance. The growth of tourism in the Bologna area has been the result of great coordination and collaboration between institutions and Bologna Airport and Bologna Welcome have always worked side by side with the common goal of bringing business and leisure visitors to the city but also offering services of the highest excellence. It is therefore essential to understand what the new needs of the future may be, in order to be prepared to maintain standards of absolute quality."

Marcel Riwalsky, CEO Aviation-Event, says: “We are very happy to team up with our host partners, Bologna Airport and Bologna Welcome, to stage Aviation-Event 2021 BLQ. Bologna is an emerging regional hub for aviation, tourism and commerce, befitting the event’s ambition to act as a catalyst for critical debate and outcomes that help lead the industry’s path into the post-pandemic future.”

Riwalsky adds: “Bologna’s step into the spotlight, reconnecting our industry and its stakeholders by providing a physical platform for effective exchange and networking, will stand as a symbol for the resilience of our industry and the communities it serves.

For the first time ever - Riwalsky ends - Aviation-Event will provide digital content produced and broadcasted live on the event’s digital channels. This will include newsroom updates from the panel discussions as well as live interviews with keynote speakers and panellists”.

Aviation-Event 2021 BLQ Agenda
Friday 27th August at 9:00 a.m., the congress will be inaugurated by Enrico Postacchini, President of Aeroporto di Bologna together with Marcel Riwalsky, CEO of Aviation-Event, the Mayor of Bologna Virginio Merola and the President of Emilia-Romagna Region Stefano Bonaccini. Some introductory speeches of the day will follow, with the CEO and General Manager of Marconi, Nazareno Ventola and the President of ENAC, Pierluigi Di Palma respectively framing the theme of the day between strategy, digital transformation, sustainability and the development of the sector, from air transport to the new frontiers of space.

In the first panel - Business travel - entrepreneurs from the symbolic realities of Italy in the world - from motoring excellence to precision mechanics - will depict their vision of doing business in a land that has so much to offer, especially in terms of partnerships for development: from the top-level services that Bologna Airport and Bologna Welcome offer to departing and arriving business travelers, to the support of institutions for the development of the territory, thanks also to a solid network of efficient infrastructures. A territory which, on the other hand, also offers more and more services for leisure tourism, including nature, culture and food. In short, Emilia-Romagna is the ideal land for business and vacations, but also a strategic access point for visiting the beauties of Italy.

After listening to a speech by Eddie Wilson, CEO of Ryanair, the airline that has strongly contributed to the development of tourism in Bologna in the last ten years, the debate will focus on possible ways for recovery. Between innovation, infrastructure and new approaches such as covid free flights, the speakers will review the current state of aviation and non-aviation business and will propose their own strategic recipes for the future, in order to find a synthesis to build a new normality together.

The third panel will deal with Sustainable Development and Investment, central topics to the recovery. The commitment to sustainability in particular will be increasingly strengthened, to make the air transport business less impactful, protect the planet and at the same time grow in new segments. The short, medium and long term sustainability objectives will be illustrated, along with the specific cases of some of the most representative companies in the sector, which will be discussed with representatives of European institutions.

Eventually, the fourth panel will try to deepen what was discussed in the two previous panels and to "draw the new normal" in a more precise way, through the exposure of business models for sustainable development and infrastructure, in order to adapt to sudden events such as pandemics and also to meet the needs of customers. 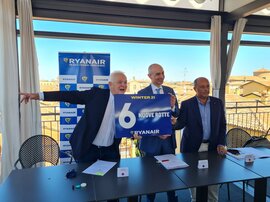 On the 27th of August ,160 experts from all over Europe will attend the international Aviation-Event conference to discuss strategies and best prac...

Bologna Airport's commitment to sustainability issues continues, with specific attention to the environment. From today, in fact, all Marconi passe...

Ryanair, Italy’s No.1 airline, today (23 Mar) launched its Bologna Summer 2021 schedule, with one additional based aircraft, 64 routes in tot...

To meet the needs of passengers departing to Amsterdam, who, due to a very recent provision by the Netherlands Government, must show the negative r...

COVID-19 - UPDATE OF THE 9TH OF DECEMBER

COVID-19 - UPDATE OF THE 9TH OF DECEMBER TRAVEL TO AND FROM ABROAD UNTIL 15TH OF JANUARY For passengers from 10th of December entering ...

YOU CARE, WE THANK

In order to thank health workers who have been coping with the Covid emergency in the last few months, from 1st July to 30th September Bologna Airp...