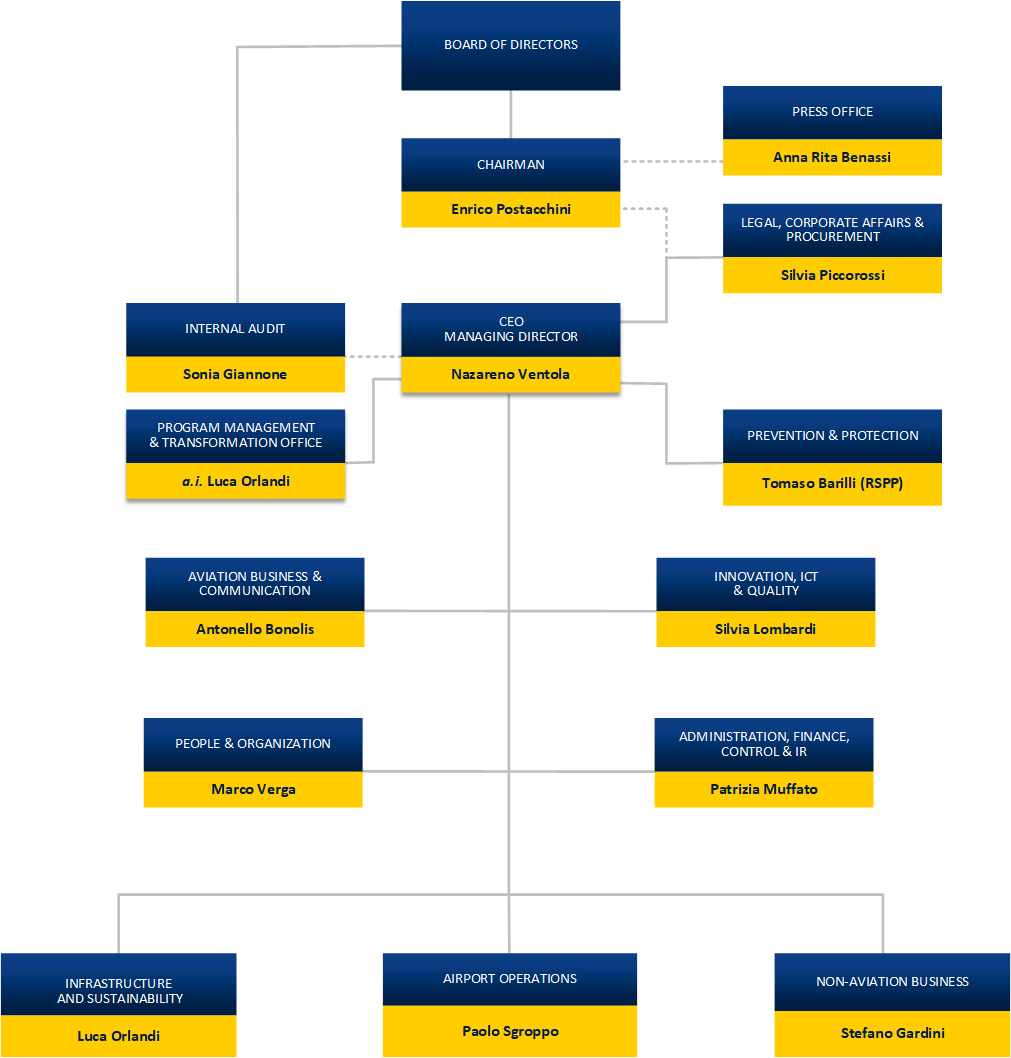 Nazareno Ventola is CEO of Bologna G. Marconi Airport since July 2015, after leading the Company to the listing on the MTA (Mercato Telematico Azionario) - STAR segment of the Italian Stock Exchange. General Manager and Accountable Manager of AdB since May 2013, he previously held the position of Director of Strategy and Corporate Performance Management dealing with market strategy, quality, budgeting and planning and control.

Earlier, he had been Planning and Control Manager. Before joining Bologna Marconi Airport team, in 2000, Nazareno was a strategy planning analyst at Enitecnologie (ENI group).

Antonello Bonolis was appointed Business Aviation and External Communication Manager in 2013. Spokesperson for Bologna Airport as a member of the BOD of Terminal Passeggeri Ravenna (a joint-venture with Royal Caribbean, Venice Terminal, Bassani Handling and Ravenna’s Chamber of Commerce), in his career he has also been president of the Airports & Travels company (a travel agency at Marconi Airport) and member of the BOD of TAG (General Aviation in Bologna).

Before joining Marconi’s team in Bologna, Antonello was also Marketing Manager at Air Europe (Swissair Group) and Alpitour Senior Product Manager. Antonello has a Bachelor of Arts Degree in Economics (hons) and graduated at Cattolica University in Milan. He followed specific training courses at Westminster University in London, ASM in Manchester and EURESAS in Toulouse, France.

Stefano Gardini was appointed Non–Aviation Business Manager of Marconi Airport in 2001 with the responsibility of the real estate, retail and advertising areas, services to the customers, including parking areas, on-line ticketing and VIP Lounge. In his professional career, he was member of the BOD of Aviogrill, a joint venture between Autogrill and Bologna Airport, and of Airports & Travels (travel agency of Marconi Airport).

He is currently ATRI – Italian Association of Retail Travel - Vice President and Coordinator of Assaeroporti (Association of Italian airports) Non-Aviation Group. Stefano graduated in Law at Bologna University, then was awarded an MBA at Profingest, well-known Business school in Bologna; he followed specific training courses at Cranfield University (UK) and the London Marketing & Business Institute.

Silvia Lombardi was appointed Innovation, ICT and Quality Manager at G. Marconi Airport in 2021 as responsible for the Innovation and digital transformation at AdB, of the infrastructures planning and maintenance and of the IT applications, as well as of the Quality and Facilitation. Silvia was formerly IT Manager and since 2009 has been dealing with Innovation and digitalisation issues. Silvia joined the Airport in 2006 as a Project manager and ERP SAP system Analyst.

Before joining the Bologna Airport team Silvia covered a relevant and significant role as Application Analyst and Project Manager at CRIF, where she followed some cross projects regarding IT and management systems.

Silvia graduated at the University of Bologna in Electronic Engineering and has an Executive Master in Technology and Innovation Management.

Patrizia Muffato was appointed Administration, Finance and ICT Manager of Bologna Marconi Airport in 2003. Patrizia is responsible for all finance and administration activities including: finance statements and plans, treasury and banks, credit management, accountancy and sustainability report. She is also responsible for the information and communication technology area, which also comprises an innovation area.

In her career, Patrizia was also member of the BOD of the subsidiary Marconi Handling and SEAF (Forlì Airport). Before joining Bologna Marconi Airport team, Patrizia was South East Europe Administration, Finance and Control Manager for PepsiCo International Ltd. in Milan. She is president of Sap Users Group (world association of SAP users airports). Patrizia has A-levels in accounting, obtained at the technical and commercial high school in Venice.

Silvia Piccorossi was appointed Bologna Marconi Airport Corporate Affairs Manager in 2010. Silvia is responsible to ensure compliance to laws and public regulations and is in charge of all legal, corporate, contractual, business disputes-related and outsourcing issues.

A member of ACI Europe Policy Committee since 2008 and member of the BOD of TAG (General Aviation) since 2010, Silvia started her activity at Bologna Airport in 1999 in charge of Legal Issues. Before joining Bologna Marconi Airport team, she was lawyer for Dr. Zunarelli international law office in Bologna. Silvia is a lawyer and graduated with a first class degree in Law at Bologna University.

Paolo Sgroppo was appointed Bologna Marconi Airport Operations Manager in 2011 in charge of airside operations, passengers terminal and maintenance; since 2014 he has also been responsible for the operating systems. Paolo is Deputy Accountable Manager. He was previously Maintenance Manager, handling all activities connected with the airside and landside infrastructures, IT plants as well as automation systems and all ground equipments.

Before joining Bologna Marconi Airport team, Paolo had an important and relevant experience as Field Engineer in Comau, a FIAT group firm, where he followed projects for Maserati, Ferrari and New Holland. Paolo graduated at Palermo University in Mechanical Engineering.

Marco Verga was appointed HR Development and Organizational Manager at Bologna Airport in January 2016.
In this role Marco has responsibility for personnel management and administration; managing relations with trade unions; organizational change-management. He is also in charge of recruitment, training and development.
Marco has a significant experience of 15 years in HR and trade union relations management, with 12 of those at Turin Airport.

Marco gained a first-class degree in Communications, after which he spent a year as Press Office and External Relations Manager at Turin University. He then moved into HR, first in Industrial Relations at Getronics (a major multinational supplier of IT and Communication Technology services), and then as HR Office Manager in Nomos, one of the group’s societies.

At Turin Airport Marco consolidated his experience, first as Personnel and Internal Relations Manager, then as Management, Development and Organizational Manager.